The biggest cloud security challenges enterprises face
At RSA 2019, Brian Roddy of Cisco discussed what CISOs should include in a cloud security plan.

Hewlett Packard Enterprise (HPE) announced new storage solutions, as well as advancements in edge and cloud computing at HPE Discover in Las Vegas on Tuesday. HPE is pushing 2019 as “the dawn of the intelligence era,” as the natural progression from the cloud computing era, and the flash storage era that preceded it.

Here are the biggest announcements from the opening of the conference.

HPE Primera, the new “mission-critical storage” solution, comes with the lofty guarantee of 100% data availability, “without requiring special contracts or onerous terms,” though Primera does require Proactive Care and InfoSight service agreement as a precondition for deployment. At Discover, representatives from HPE characterized the guarantee as a “credit of up to 20% for that customer” for future upgrades and services.

Performance is likewise claimed to increase with Primera, with an “all-active architecture that brings massive parallelism and multi-node performance, which accelerates applications, including 122% faster Oracle performance,” according to a press release. HPE also claims a 20-minute self-installation, and 5-minute software upgrade process.

HPE’s storage portfolio is, to a significant extent, a story of mergers and acquisitions. HPE is touting seamless deployment of Primera for existing 3PAR customers. (3PAR was acquired by HP in 2010.) HPE acquired Nimble Storage in 2017. These products continue to exist as current supported offerings, though for slightly different usage scenarios.

Perhaps the most notable announcement came from HPE Edge Computing, with the ruggedized “Secure Edge Data Center for Microsoft Azure Stack,” an IP55-rated cabinet providing “environmental protection, cooling, redundant power supply and distribution and automated management.” It allows customers to run Azure applications in adverse environments like factories or oil rigs, according to a press release.

Generally, Azure Stack certified hardware allows organizations to run Azure applications from the public Azure cloud, while leveraging data on-premise. HPE’s offering is akin to Panasonic’s Toughbook—as a ruggedized system for use on-site—though in contrast to the Toughbook being a notebook PC, the Secure Edge Data Center is essentially a specialized rack.

The Secure Edge Data Center is available in sizes starting at 800x1200x2250 mm, and is shipped “completely factory integrated, with plug-and-play onsite experience,” according to an HPE presentation. 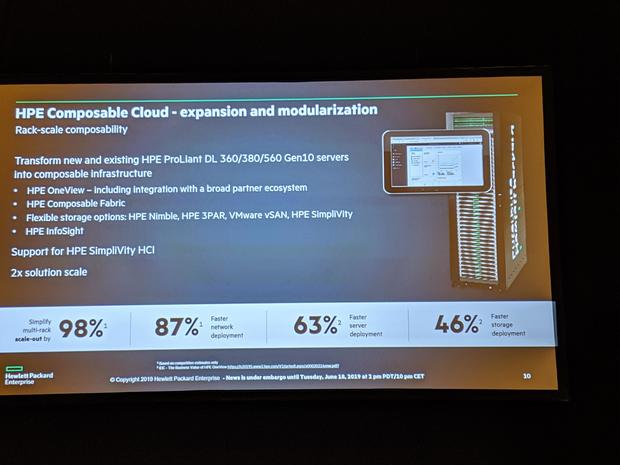 For the first time, users of existing HPE ProLiant 360, 380, and 560 Gen10 servers can be migrated into HPE’s Composable Cloud infrastructure, using the OneView infrastructure management solution.

HPE also announced the SimpliVity 325, an AMD EPYC-based 1U system with all-flash storage, targeted for remote office or space-constrained locations, as well as the SimpliVity 380 storage-optimized node for HDD/SSD storage, with the ability to synchronize copies of data from off-site SimpliVity implementations.

So far, HPE Discover 2019 is more iterative than transformative—the prospect of 100% data availability is certainly interesting, though the language surrounding how companies are compensated in the event of failure is more difficult to pin down. It is a lofty goal, however, and will set HPE apart from Dell EMC, to say nothing of potentially competing products also sold by HPE. Likewise, HPE’s continued reliance on AMD CPUs for some server products should bring attention, as Intel’s ability to deliver Xeon CPUs on time and in sufficient quantities may be prompting this move.

Fortunately, HPE Discover has thus far been absent any major missteps, such as the $1,000 monitor stand showcased at Apple’s Worldwide Developer Conference earlier this month.

Master the fundamentals of big data analytics by following these expert tips, and by reading insights about data science innovations.
Delivered Mondays 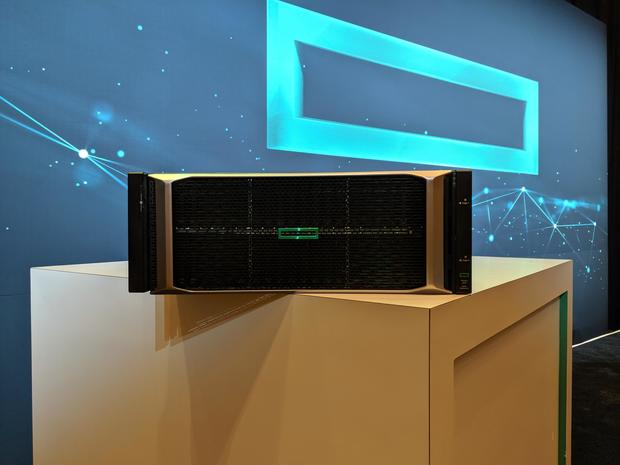